On November 26, 2012, the Government of Canada commemorated the Legacy of Indian Residential Schools through the dedication of a stained glass window in Parliament. The window is permanently installed in Centre Block on Parliament Hill. This video highlights the making of the stained glass window, interview with the artist, as well as interviews with […] 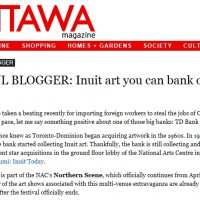 The Artful Blogger from Ottawa Magazine by Paul Gessell |  April 17, 2013  |  11:00 am This article features some Ottawa Inuit artists, including local photographer, Barry Pottle. Barry’s work was featured among other trendsetting Inuit artists’ work shown at the National Arts Centre from April 25, to May 4, 2013. Paul Gessell’s article describes […] 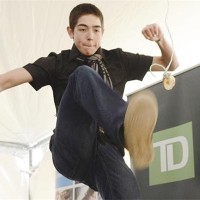 On Wednesday, April 3, 2013, the Ottawa Inuit Children’s Centre opened its doors to a new Youth Centre. The building was acquired through the generous support of the TD Bank. Mayor Jim Watson, TD Bank officials, Terry Audla, president of Inuit Tapiriit Kanatami, and artist Tim Pitsiulak were amongst the guests who help to celebrate […]


“North Boys, South Girls” featuring the OICC’s very own Lynda Brown and Heidi Langille, will be airing on Absolutely Canadian, on CBC Television, Saturday, March 9th, 2013. This is a national broadcast on CBC’s main network. The program airs locally on CBC Ottawa (Rogers cable 8) at 12:00 ET. For air times across the regions, […]

AANDCanada, Feb 14, 2013 Celebrating positive changes, partnerships, and growth in Aboriginal communities, The Ottawa Inuit Children’s Centre was approached, late in 2012, to feature its Kindergarten program. This program is funded by a partnership between the City of Ottawa, the Ottawa-Carleton District School Board, and the Public Health Agency of Canada. Serving the largest […]

©2015 by The Ottawa Inuit Children's Centre | All Rights Reserved.